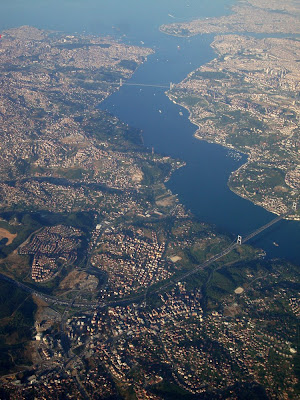 The Bosporus, also known as the Istanbul Strait (Turkish: İstanbul Boğazı), is a strait that forms the boundary between the European part (Thrace) of Turkey and its Asian part (Anatolia). It is one of the Turkish Straits, along with the Dardanelles. The world's narrowest strait used for international navigation, it connects the Black Sea with the Sea of Marmara (which is connected by the Dardanelles to the Aegean Sea, and thereby to the Mediterranean Sea). It is approximately 30 km (19 mi) long, with a maximum width of 3,700 m (12,139 ft) at the northern entrance, and a minimum width of 700 m (2,297 ft) between Kandilli and Aşiyan; and 750 m (2,461 ft) between Anadoluhisarı and Rumelihisarı. The depth varies from 36 to 124 m (118 to 407 ft) in midstream. The shores of the strait are heavily populated as the city of Istanbul (with a metropolitan area in excess of 11 million inhabitants) straddles it.

Two bridges cross the Bosporus. The first, the Bosphorus Bridge, is 1,074 m (3,524 ft) long and was completed in 1973. The second, Fatih Sultan Mehmet (Bosphorus II) Bridge, is 1,090 m (3,576 ft) long, and was completed in 1988 about 5 km (3 mi) north of the first bridge. Plans for a third road bridge, which will allow transit traffic to by-pass the city traffic, have been approved by the Ministry of Transportation. The bridge will be part of the "Northern Marmara Motorway", which will be further integrated with the existing Black Sea Coastal Highway. The location will be somewhere north of the existing two bridges, but the exact path is kept secret to avoid an early boom in land prices.